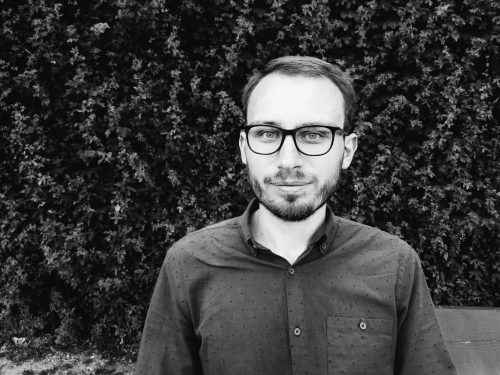 Paweł Szroniak is a curator and literary theorist. Since 2013 he organizes a series of concerts “Rozkurz”, which is dedicated to experimental music. Among his main interests and research, topics are the history of avant-garde movements, small music, conceptual tendencies in contemporary art and unconventional examples of music notation, especially text scores. Szroniak has been collaborating with numerous cultural institutions and festivals, including Bunkier Sztuki in Kraków, Museum of Art in Łódź, Wrocław Contemporary Museum, BWA Wrocław, Sanatorium of Sound Festival (Sokołowsko), Festival of Theatrical Music (Jelenia Góra), Mikrofestiwal – Festival of New Poetry (Wrocław). In 2016 he was a managing editor of the #29 issue of Glissando magazine. Lives and works in Wrocław.

The best seats in the dining hall: Black Mountain Happening