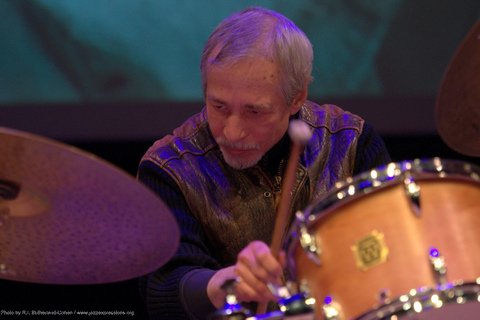 A native New Yorker who grew up seeing the likes of Monk, Miles, Mingus, and Trane during the twilight of jazz’s golden age, Todd Capp started playing drums as a student at the University of Chicago. He cut his musical teeth playing the blues in South Side basements while absorbing fresh approaches to sound, space and time developed by the newly-formed Association for the Advancement of Creative Musicians (AACM). He played his first session with Roscoe Mitchell, Lester Bowie, and Arthur “Big Boy” Crudup (author of Elvis’ first hit, “That’s All Right, Mama”), made his first recording (unreleased) with Anthony Braxton and Elvin Bishop, and performed his first concert, in l967, with a cooperative group including future AACM leader Douglas Ewart.

After a brief sojourn in Northern California, where he played tabla duets with the Pacific Ocean and performed with the Free Arts Workshop and visionary keyboard genius Eddie Sears, he returned to New York. He performed downtown with Denman Maroney at The Kitchen, uptown with Clyde Cotten’s Kwanzaa Ensemble at the Club Baby Grand, and by the late 70’s, his Improvising Orchestra, whose members included William Parker, Jason Hwang, and Roy Campbell, was a fixture on the downtown loft circuit. A 1978 recording, Quintessence (released in 1999), was deemed “timeless…a cosmic slice of history to be cherished by out/jazz lovers worldwide!” by Bruce Gallanter in the Downtown Music Gallery Newsletter.